February 5, 2021
Introduction
For those who are new: the coal storage and loading building is the construction near the tower where the coal used to be stored on the first floor in 9 different bunkers. The ground floor consists of 3 rooms of 4 x 11 meter. Three trucks could be loaded with coal at the same time. This was done through chutes in the arch shaped ceilings of the rooms. Each room had 18 chutes which could be opened manually by a slider. Why so many chutes? To load the truck evenly.
Why new chutes?
The chutes were made of metal sheet but very corroded (50 cm high, by 30 x 20 cm). Whatever we would be doing with the space below the chutes, we would always have rust particles falling off. Therefor I decided to completely remove all of them, which proved to be more work than estimated as the chutes where placed before the concrete for the arches was poured. But all were removed within a few days and the ones in the third room were coming down with the demolition of the old arch as this one was completely rebuild.
Cutting the steel sheet of 2 x 1 meter, thickness 1.5 mm
I realized that making 3 x 18 of those chutes would be a lot of cutting with the grinder, so a lot of noise, dust and many hours. I looked for other ways to cut the steel sheets and decided to buy a new plasma cutter. What a super good decision did this prove to be. After some practicing I got this skill quickly under my belt. It works fast, as good as no noise apart from the air compressor which needs to be connected to the plasma cutter and you create a straight and sharp edge on the steel.
Each sheet was cut in 4 pieces of 100 x 50 cm.
Bending machine
I needed a bending machine and bought one on an auction in The Netherlands. Wim - brother of Ans - was so kind to collect it for me and deliver it over the border at a German transport company who brought it here on the island. The bending of the material was fun to do. The sheets were bended on the side where on the line drawn with a steel scratch pencil at exactly 30, 50 and 80 cm, which results in a rectangular box of 50x30x20 cm.
Welding
The welding was done using the MIG welder, the one of which brother said that they use these giant welders to make oil tankers. I bought one a few years back on an auction in Germany, but never really used it myself. Ondrej - the volunteer who stayed here 2 years - did all this kind of work, and I never really paid attention to how he did it. Again I had to go through a learning curve, but it's not rocket science and with some down to earth practical and logical thinking and practicing I learned it quickly. MIG (Metal Inert Gas) welding is much easier than simple stick welding, but the equipment is much more expensive and you need a mix of Argon and CO2 gas (to prevent the steel wire from burning).
Aging of the first 18 chutes
I decided to make 18 chutes as the first batch, the number I need for 1 room. There are various methods to get get a rusty look and on WikiHow.com I found a clear and nicely illustrated list of methods. I chose to use 25% hydrochloric acid in which I dissolved some copper wire for a week. After a week it gets a lemonade green color, which I cannot explain, as copper (Cu) should not react with HCl. I do know that copper oxide is green (CuO)... well ... whatever.... if anyone knows what happened, let me know.
I used an empty spray bottle of a cleaning agent to treat the shiny metal and left it outside as I was not sure if there were any nasty gasses being produced like chlorine vapor. The next day I could not believe my eyes when I checked the progress. No shiny metal anymore, but a rusty old looking piece of steel. It's now outside for 3rd day and the process of corrosion continued, giving it even more patina.
Stopping the corrosion process
Online I bought a product called Rustol of the brand Owatrol. It's supposed to stop the corrosion process and seal it against water and oxygen entering the rusty steel. So exactly what I want. By the way: I could have used corten steel, which gets a rusty look after which the process of corrosion stops as well, but this type of steel is 3x more expensive. Owatrol Rustol is not cheap (€26 for 1 liter), but you can treat 18 m2 with it, so it's definitely a more economic solution.
Placing the chutes in the rooms
This is something I still have to do. I am also not sure if I want them all to look rusty. The middle room of the coal storage building will be the multi-media room and I think this is the best room to place the rusty ones. The left room will be the 'industrial kitchen', where I think it would look better if the chutes had a stainless steel look. For this I will buy a sand blaster gun, connect it to the compressor and use the special sharp grid or normal sand and this way shoot it at the chutes. I hope it will do what I expect: it will get a 'brushed steel' look.
Some short notices 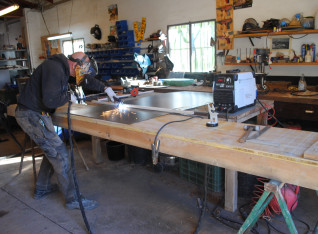 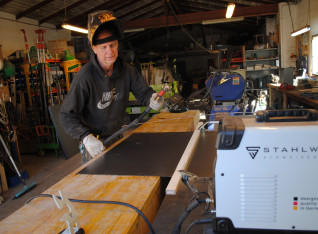 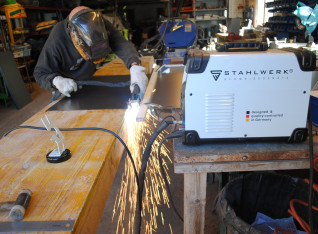 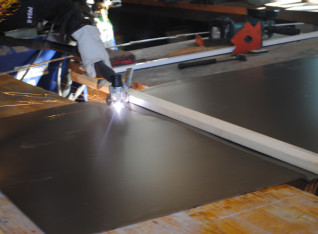 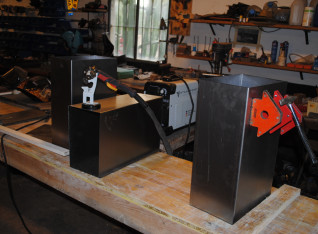 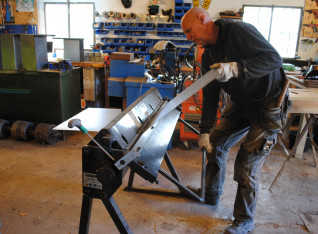 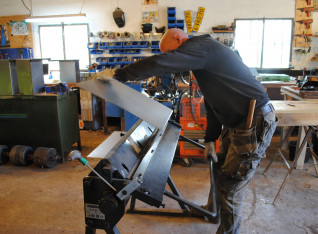 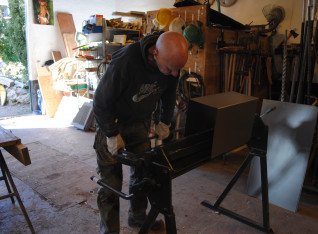 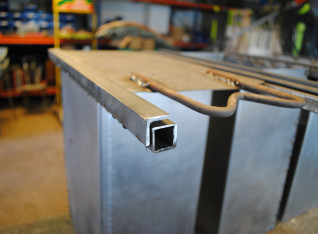 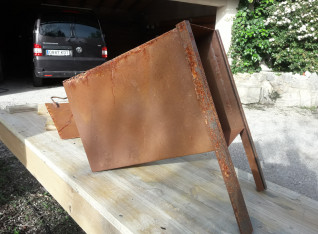 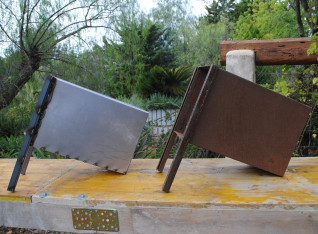 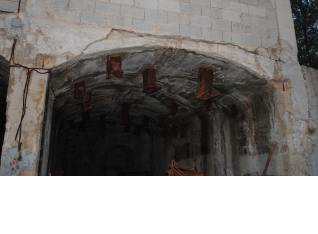