Building a Home for the Porks - aka Alizee and Rachel 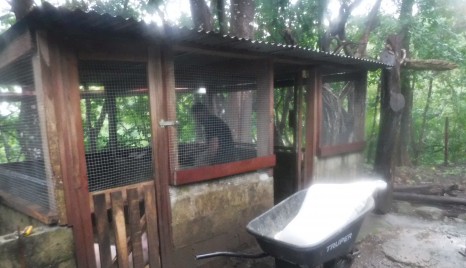 There was once a French couple from a town named Breast (I kid you not) they arrived on foot and we will forget the rest. They were a nice couple, although they had filthy minds and even fowler language, they had no idea that in just 2 weeks they would fall in love with two piglets named Alizee and Rachel. The day before their arrival we were informed that some people were coming the next day for a BBQ and a few drinks and that we would be cooking a whole pig :) and leaving us 2 further pigs to look after!! All we heard was BBQ and full pig, oh it was like a dream. Was it butchered already? Did it come with Cumberland sausages and bacon (we are from England we always dream of such things) or was it on a spit? It turned out it was butchered and ready to go but it was huuuuuge and was apparently the father of the newly acquired Alizee and Rachel (shock horror).

We have only a modest BBQ here on the finca, sufficient for our needs on a weekend but certainly no ready for a full pig. They boys set off to work building a fire and we ran to the kitchen to prepare a feast fit for such a beast. In 3 hours we were ready, the pork was cooked, the wine was flowing and the accompanying foods were all ready to go. Plate after plate of pork was passed around, until we couldn’t move, only to be told that there was still half a pig left to demolish!!!!! I gave in around the 4th plate, Nick lasted a few more but needless to say the next 7 days consisted of pork stew, pork cutlets, pork and rice, pork and beans….you get the idea.

This however, is hardly the point of the story, Alizee and Rachel had nowhere to live or sleep and as it turned out this is a pretty big deal. The pig pen to end all pig pens had to be build and pretty sharpish!! 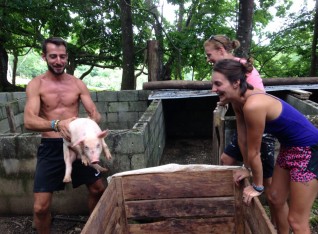 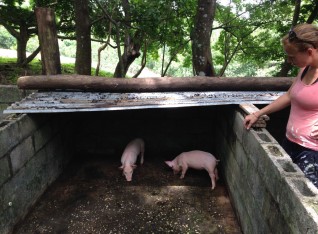 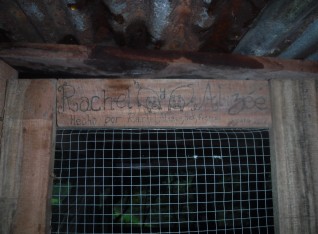 With zero notice and only slightly more materials we had to find a home for these little guys.  Down in the corral there used to be pigs, about 30 years ago, so we thought cool we can just pop them in there no problem. Oh there was a problem alright, the vet accompanying the pigs to the BBQ informed us that they have certain standards, that are never lowered, even if you are volunteers with no knowledge of the wants and needs.  Think of them more as princesses than piglets, feather quilts, 43 mattresses, flat screen TVs, china dinner sets and only the best of standards will do

A dry concrete floor which has to be sparkling

Partial shade but warm conditions to keep them dry

The pen must also be dry and water tight

Shelter and plenty of air

Lots of water to drink

As you might have guessed we started this with little to zero knowledge, so a few posts went up half a roof went on and two small garden gates blocked the doorways. We were pretty pleased with our days work and were just about to put Alizee and Rachel to bed for their first night in their new home when Manuel came along.  Damn you Manuel!!!   Look at our great work we said, haven’t we done well we gushed, wont they be happy we thought… The man of few words just looked and smiled and shook his head, this won’t do, are you crazy?   They need full protection, we have wild cats, and rabid bats that will bite them you can’t leave them like this….Sad faces all around.

The Even Bigger Build

So the next day we took a trip to the local ferreteria, (think B&Q but without the ability to wander around)  We currently speak very little Spanish so this is always a fun trip, frantically googling the Spanish word for chicken wire we bought our goods and were out of there in a flash (well a 45 minute flash, more like a slow burning candle).  Another 6 hours later they had a roof, full doors and enough chicken wire to keep a heard of wild cats out.  No bats, no jaguars, not even a rat was getting to these precious piglets.

So we left them for their first night alone after they had been brushed, fed with bananas from the field next door, cleaned and molly coddled more than even peppa pig.  They looked pretty happy to me and by this point Francois and Alizze were already had over heels and we knew that nothing would ever been too much for these pampered pigs.  Still to come a pampered prince to make more royal pork, thankfully we have already made him a palace all of his own.

Until next time, from princess’ Alizee and Rachel oink oink…pura vida