When we arrived at the finca, one of the first thing we noticed was a very large partially tiled circle at the front of the house, surrounded by huge burnt down posts. What happened there I hear you ask? oh, just a lightning strike that burnt down the old outdoor kitchen and left all the posts scorched. Nothing to worry about, I mean if it happened once it will never happen again right? Ha how wrong you are, apparently this is the second time a building on the finca has been struck by lightning, the last time at El Ranchero, a large tree was struck and burnt down… so not as uncommon as I thought then. Well we won’t dwell on that too much, I mean what’s the point, if you’re going to get struck by lightning there’s not a lot you can do to prevent it, a lightning rod on the roof could be a starting point maybe. (On Order to be delivered just in time for Christmas)The old images of the kitchen came out, it was a cross between a teepee and a pergola, not exactly striking (haha you get it striking…ahem, anyway) but apparently very Costa Rican. What should we put in its place? A helipad maybe, its certainly big enough, an outdoor games room, or another kitchen, go on them. Many, many, discussions ensued, it has to be visually stimulating, its right in line with the amazing view, so It cannot really compete but it 100% cannot look ugly or boring. First things first, deal with the foundation that is already there, how do we deal with this break it all up and start again, with only manpower and two pick axe this wasn’t exactly a viable option, so we decided to concrete directly over it, if the lightning hadn’t destroyed it, we decided that we couldn’t do much harm re-using the old foundations. To make sure that it wasn’t going to budge we knocked off some of the tiles and roughed up the surface a touch, by which I mean absolutely destroyed it and then covered it with rebar (think giant and very heavy chicken wire). This would be our foundation and now we are stuck, we have been at this point for over a month now as we cannot agree on a design, I like modern, Heimo wants traditional Costa Rican and Nick wants a Ranch type kitchen, the one thing we all agree on is that it will be huge and it has to have a pizza oven and BBQ, although we aren’t sure where the chickens will live once this is finished. We may have to find a new water tank for these guys. On this topic I’ll keep you posted, but for now it will remain our helipad, until we can decide on a design and move the very heavy posts… Wally to the rescue.Until next time from the pizza loving ponder’erers…pura vida! 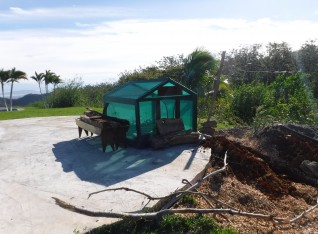