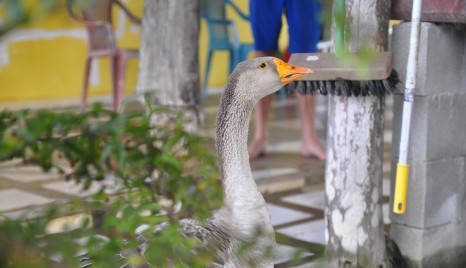 After almost 3 years of hard work on the finca, our main man Manuel decided that it was time to move on and concentrate on his Orange Finca full time. We wish him all the best of luck but will miss him terribly. He left on a particularly rainy day which reflected the mood all round, but we will see him again, although we don’t know where or when. – Update – we passed him on the road he was as usual working hard with a machete cutting down the weeds that had grown around his house. On leaving day Manuel came to the house with a freshly plucked chicken, a goose and 5 chickens (unplucked and living). As usual we were aghast, what do we do with a goose Manuel? He threw some corn on the floor and said, that’s about it!! And wandered back down the hill to finish clearing out his house. Myself and Nick were home alone as our volunteers had gone away for the weekend to the nearby Samera, which I am told is very lovely.

Immediately the goose started to poop all around the veranda, and I don’t mean one or two poops, these were every where, every other step was accompanied with a poop. On the plus side he seemed pretty friendly and took to Nick as though he was a mother goose, literally every step Nick takes, the goose takes two slappy steps behind him. You can hear them coming a mile off, scuff scuff go Nicks flip flops and then slap slap slap slap comes Gerry waddling behind him. Oh yea by the way he is called Gerry, we named him Gemma initially before finding out she was actually a he. He maybe a little confused but I think he is getting the hang of it. 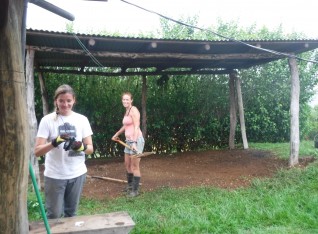 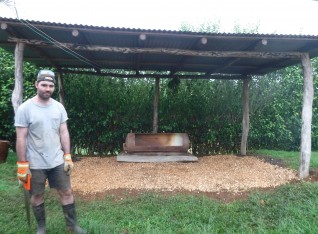 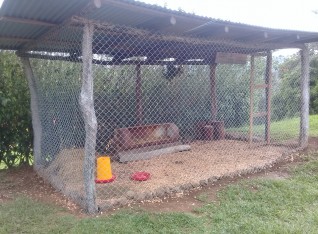 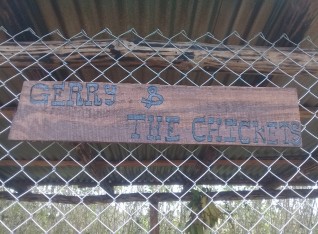 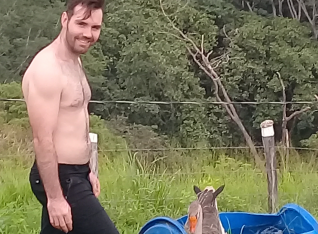 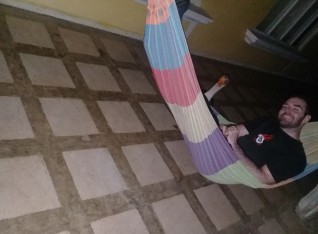 On Sunday after having adopted Gerry the previous day he wouldn’t leave Nicks side, but we had to go to feed Alizee and Rachel, the pigs, so we left him at home to guard the house.  Or so we thought 2 seconds later he is running down the hill to catch us and decided that he is now more of a dog than a goose.  I looked this up and apparently this is called imprinting, Gerry now thinks that he is human and can do everything that a human can do :s.  So there he was happily waddling from side to side in front of Nick to feed the pigs, he actually walked the full way, it’s a 30 minute round trip!!!  A goose dog the things that happen on this finca just amaze me.

On the way back we popped next door to see what Manuel had left behind and lo and behold there was a goat in the barn in he process of giving birth to two kids, it was happening as we got there, it was so amazing. We stayed to watch the birth with our pet goose-dog (doose??? Not sure if this will catch on) and then came home for home made pizza and banana bread.  It was pretty much the weirdest day we have had on the finca so far and also my birthday, I think I might remember this one.

Happy New Home - or not

So here we are with a Goose and 5 chickens, yet another house to be built at short notice for Gerry and the chickets, so our water tank that was supposed to be our BBQ has been renovated into a chicken coop, and some chicken wire has been put up around the outside of the posts making it pretty much the easiest house to be built ever.  These guys aren’t as needy as the princess pigs, all they need is some corn and a hut, ahhh simple.  Ironically enough the chickens will be laying their eggs in our future BBQ, we wont tell them if you don’t.

At the moment neither the chickens nor the goose seem to be too enthralled with their new home, the chickens wander in for some corn, dig up the stones we put down to roll around in the mud or jump on the top of the BBQ.  They seem to prefer the orange trees or the veranda, I’ve even built them a climbing frame, they are so ungrateful.  And as for Gerry, he doesn’t leave Nicks side we have to trick him to leave the house, we were playing darts just last night and every step Nick takes Gerry is there right behind him, he even has his own swimming pool but has to be lifted into it.

Future tasks - how to get a goose to go to bed at night, stop pooping in the veranda and stop thinking he is human!!! And how to get chickens to stop digging up the stones that they think is giant corn!!! Although the latter is pretty funny to watch.

Till next time, from Gerry and his Chickets….pura vida.