The Galleron is a place of hard-work and determination, our whole finca revolves around this one spot. This is/was where all the wood is stored, where the fertilizer for all the trees and plants lives, the tools now live, and the workshop is based. As you can imagine it’s pretty busy here, it was also a mess until not so recently with piles of wood for burning, making things, some drying out and some just full of tarantulas, scorpions, frogs and ants. We need lots of wood to complete the Helipad kitchen, the outdoor kitchen at El Ranchero, and to build furniture for the volunteers that live here. So we looked into buying some and also into getting some of our own trees cut down and purpose cut for our required plans. However, the trees here in Costa Rica aren’t called, Pine, Oak and Birch like the trees at home so we had to find out what was good for what.After some of the usual googling we found out that we have a plentiful supply of Gmelina, which is a hardwood and grows widely throughout Costa Rica, it is used primarily for doors, window frames and more recently flooring. We also have some Gallinazo dotted around the finca, this is a soft wood and is used mostly for boxes and pallets, we will use it for making casts for cement and other construction work. Espavel Amarillo is traditionally used in carpentry and furniture making here in Costa Rica, as well for making the trays for corn and bean processing here in Costa Rica. However, they all take around 4 months to dry out, sad faces. The drying out process was not something we had factored in to our plans for getting the outdoor kitchen and Helipad finished so this was a bit of a dampener, maybe this is why it’s cheaper to get it cut rather than buying it. We decided to get as much as we can store in the Galleron cut and then we don’t have to wait longer next time we want to build something…Genius.We have some interesting weather here on the hill top and on a particularly windy day, whilst we were away relaxing in the sun actually, it turns out that one of our Guanacaste trees fell down, this is sad indeed as this particular tree is protected here in Costa Rica as it is their national tree and cannot be cut down (unless its on your own land, but you cannot sell it). However, as this one fell down we can cut it and use it here on the finca for our own projects. The Guanacaste Tree, or Elephant Ear (because of the shape of the seeds) is huge and local to our finca, which makes this even more special, so we will have to find a really good use for this…we will be Costa Rica’s version of Geppetto and Pinocchio in no time. But for now, it is to be cut and stored in the Galleron ready to be used on a special project once it has dried (probably in about 40 years). Good Luck Wilson with this job, these trees are sooo big.Once we eventually got around to selecting the trees, Wilson the Woodcutter arrived with just a chainsaw, the same one that we have here, but with some kind of special guard on it and a small blue pickup truck. That’s it, like literally nothing else, he just cuts down the trees, makes a space and a bench out of the wasted wood to have his lunch on and to rest his wood for cutting and Bob’s your uncle Fanny’s your aunt you have up to 22 perfect looking planks of wood ready to be put in the Galleron for drying.This process wasn’t without the usual hiccups, the roads to the trees were not exactly tarmacked so these had to be ploughed by Nick and Wally so that Wilson could pass in his truck and so that we could collect the wood in the trailer. Obviously the trees weren’t on the most even of ground either so we had to climb up the hills to collect the wood and create some nice paths so that we could get it all back down the hill, but if Wilson could cut it for us, we were certainly going to collect it. The Galleron now looks like the worlds most un-organized wood shop, which I guess is kind of what it is, there is some stacked in piles, some stood up against the rafters, others leaning against some particularly un-sturdy looking beams, and some just generally making the place look a mess. Another solution is needed, especially now as we are wanting to keep cutting wood to store for future use. Once the shelving for the container arrives we can clear it all out and make the place a bit more habitable, but for now it shall remain a mess, but more organized mess than previously.Until Next time from Geppetto and Wilson the Wood Cutter…Pura Vida! 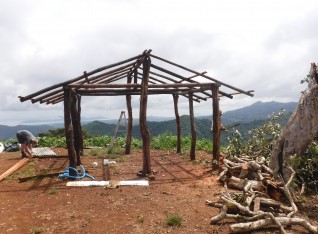