The Day we got a Tractor – or almost 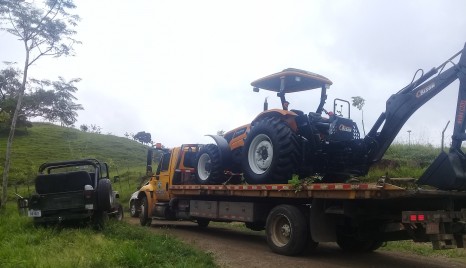 After the usual amount of pondering about whether a tractor is really necessary on the finca, by which I obviously mean a boat load, it was agreed that yes, we do need one. A few good reasons why we need one are:-

1) It puts a lot of pressure on your windscreen when you use an old Jeep Willie to move over 250 planks of freshly cut wood, not to mention the amount of saw dust that gets in your hair and eyeballs. It is also very itchy, don’t try this at home in a convertible.

2) Our farm tracks are full of huuuge boulders, it’s like bumper-cars crossed with the bouncing frog and over at Heimo hill if its rained you can’t even talk about going up there, it’s a death trap.

3) Finally, tractors are amazing and I want to learn to drive one! How many girls from the Boro can say that they can drive a tractor, other than all the ones that have been to digger land, but they don’t count. I’ll wear my wellies and wellington socks, don my head scarf and chew on some straw and be a regular farmer chick, woop.

So three perfectly good reasons why we need one, BUT do we need a new one? Mmmm an old one will come with old problems and a new one is problem free and guaranteed… hahaha you must be kidding if you think that’s true. 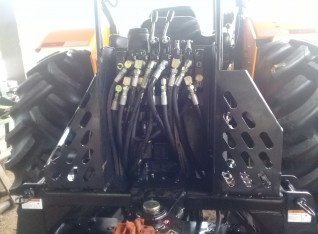 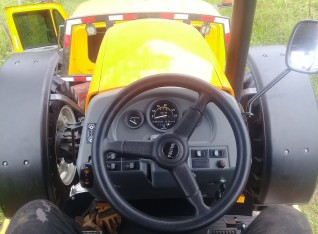 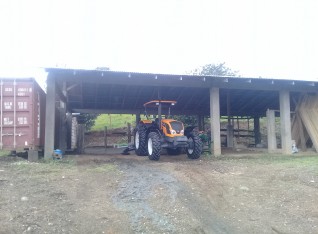 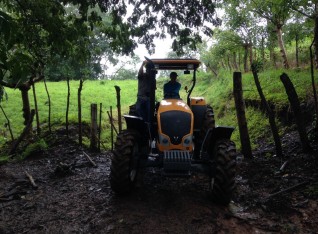 After around 42 interviews with 3 different tractor companies we settled on two, I mean why liaise badly with one company when you can speak broken Spanish to two?  Valtra, who by the way gave us free driving caps, which I think swung the deal, were to supply us with the tractor and a bahop and Kaizer would supply all the other tools - a fork lift, front loader, trailer and a road maintaining jiggy (I don’t know everything about tractors, OK). This last one makes the roads all nice and smooth and puts an all-important camber on them, which when you have as much rain as we do is esssssssential.

Ill skip all the boring chatter about how much they wanted to charge and how little discount they can give and why in Costa Rica you cannot get a warranty for longer than a year.  I mean Hyundai give 5 years for goodness sake, here you get 100 hours or 1 year depending on which comes first (needless to say our fearless jeffe managed somehow to wrangle 3 years for free).  Let’s just say that it was boring and took up way too much of our valuable farmer time.

Then came the big day, T-Day if you will.  At around about lunchtime, just as Nick had cut through a waterpipe with the strimmer, and water was spewing all over the garden. I was outside in the middle of cultivating my bush (an actual hedge) the volunteers (Nicholas and Noemie were up to their eyeballs in Gerry poop and my hedge trimmings and lunch was burning on the hob; they arrived, perfect timing.

So, we turned off the water at the mains, we would worry about that later I guess, turned off the semi burnt pasta sauce and left the volunteers to heard Gerry out of Nicks way, and headed on down to the Galleron to meet our new buddies.

On the back of a bright yellow truck was our very own bright yellow tractor, all shiny and new, all we had to do was get it off there.  Super confident the guy hops out of his truck and jumps on board our new tractor (yet to be named) switches it on, brilliant and tries to move the bahop to get it off the truck mmm.  Nothing happened and then all of a sudden, the tractor was being sick all over the back of the truck, bright yellow sick all over our shiny new toy, it was like bile - bork.  I looked at Nick; he looked at the sales man and well, words were exchanged. Technical hitch they said, just a bit of plastic missing no issues, there’s a guy on the way don’t worry.  So we headed up to the house for a cuppa, we are still British you know and Nick popped out for a piece of pipe to fix the hydrant that had erupted out the back.  After 30 minutes of being attacked by Gerry they decided it was best to wait with the tractor and left us to it. Another hour later a mechanic arrived and an hour after that we discovered that not only was the bahop not gong to be working today, but that it had some actual structural damage .  One on of the footplates, which are around 5/6mm thick steel was bent!! Something that had apparently slipped everyone’s notice but ours, mmm that’s why it was so much cheaper than anywhere else.  We contacted Heimo, they contacted their English-speaking manager, Maurice, and we peasants decided to leave it to the big boys and come back to the issue tomorrow.

The big boys did indeed come back, but the Bison bahop is obviously bigger and better than they are, as it still wasn’t working.  The whole front of the bahop was now off and sat on the floor in many pieces  Rafael the mechanic, just looked at us and shook his head “we are sending the full hydraulic system back to be fixed” he said, so no bahop today (I’m sure we asked them to do that yesterday but hey, who is keeping score).  However, the tractor is working and this we did get to play with it.  A little meander down one of our lovely roads to practice some simple driving…in the pouring raining, and Nick being a gentleman let me go first!!!  A piece of cake, no problema, until I started to slide sideways and almost took out one of our gates, I will just add that the road was very wet and narrow, as was the gate and it was full of very deep trenches and boulders, and it was wet, I think I mentioned it, but it was, very wet.  Anyway I composed myself, managed to break just in time, went into 4 wheel drive - low and added a little more torque (haha totally know what I’m talking about) and gently does it, I made it down the hill in one piece.  Not a chance in hell I was going to try to get back up it though, so over to Nick.

All excited like a kid with a toy tractor, only much bigger and a lot more expensive he hops in and takes off like a pro… until he remembered he isn’t a pro and the road is insanely wet and full of ravines.  Oh and there we go, we were in a hole that was as big as the front tyre, the engineer gave us a sideways look and exited the tractor to the side of the “road” to give instruction.  I just don’t think he wanted to be anywhere near it when we slid back down the hill and through the narrow gate.  So back into 4WD low, extra torque and then …tortoise mode!!! Oh yeah there is tortoise to indicate how slow this thing can go (there is also a hare but this mode isn’t for any fun stuff like this).  A little nudge of the accelerator arm and a firm foot on both breaks (it has two) and we were out of there!!

Tractors it turns out are even more fun in real life, throw in a little rain and some mud and voila you got yourself an action-packed afternoon at 0.6kmph (no joke).

We are just waiting on the accessories to be fixed and the others to be delivered and we will be digging holes, moving wood and fixing roads before you can say Walta the Tractor from Valtra.

Until next time from the trainee tractor twosome and Walter (spelt Walta but affectionately known as Wally) …pura vida!