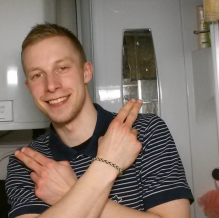 I am a professional waiter. Have done customer service for about two years, and learned to cater any kinds of feasts. From coffee-breaks to bigger gala-celebrations. I have even served the president of Estonia. After I graduated gymnasium I went straight to serve time in the Estonian Defence Forces. Became a Junior Sergeant, the head of a 3-man team. After army I became a waiter. At free time I like to do sports - drive a longboard, play basketball, football, throw some frisbee, also I've been doing photos for a while now. Been practising with a soviet-aged 35mm film camera, called Zenit-E: http://phatpipe.tumblr.com, and have made some shots with a digital Canon EOS 400D camera: https://www.flickr.com/photos/133384669@N02. To sum that all up, I am interested in art, music and sports.

As my proffession at the moment I am a waiter, have been doing that work for over a year now, and I can say I'm pretty good at it. I've learned to deal with all kinds of clients. Learned to cover a table with different settings, to clean the table, to do different household activites. I have grown up in a big family, and I was and am the biggest brother. I've learned to deal with kids. Furthermore, our family have been keeping up a greater countryside. We don't have any animals, besides our lovely dog Asgard, but we have done lots of construction work, and also gardening. I like to do things as good as possible.

I am not a smoker, I have a drivers license, I am not a vegetarian and I have no allergies.

I am allergic to pollen, at springtimes. It creates a rash on my skin to certain areas, but that is all that it does.

Type of work I want to do

Where I want to volunteer

More photos about me