Badrinath with Valley of Flowers and Hemkund Sahib | Trekveda 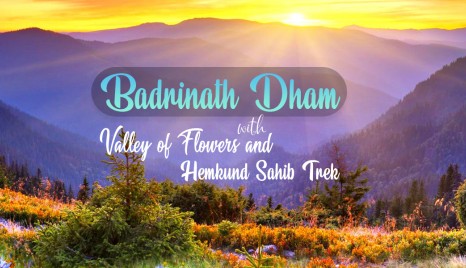 Badrinath is situated between Nar and Narayan mountain range in Uttarakhand is one of the most sacred pilgrim for Hindu Devotees in India. The popular belief is that Badarinath was the domain of Lord Shiva, and Lord Vishnu managed to unseat Shiva from here to Kedarnath. Another belief is that when Ganga made her descend to earth she split up in to twelve streams and one among the channels, Alakananda felt on Kedarnath which gives Badrinath its majestic look.

Valley of flowers the most beautiful valley trek of all time in the Uttarakhand trekking destinations, the flower trek offers the rarely seen blossoms such as the blue Primula glowing, the best time for theValley of Flower Trekis between mid-July to mid-August.

The journey starts from the Joshimath for which there is a direct drive from Haridwar/Rishikesh/Dehradun, on the way you encounter Hemkund Sahib the shrine of Sikhs.

You will be able to see the high elevated lake Hemkund (14,100 Ft.), the most sacred destination for Hindus and Sikhs. The Gurudwara and a Lakshman temple nestled on the bank of the lake, encompasses by seven snow-clad peaks and the glaciers, the beautiful valley reflects the enchanting vistas and the bright, serene water, the beauty lies in Indian Himalayas shows how magnificent trekking in India can be, as the Himalayas offers the astonishing view in treks in India

The altitude of Badrinath Trek is 10,278 Ft. Valley of Flower 12,100 Ft. Hemkund Sahib 15,200 Ft. The trek will open up the glimpse of beautiful mountains around. The important thing that one has to keep in mind is to take the proper medication with them at the higher altitude. Though we provide every possible thing but it is always better to keep your medicines. Hydration is the most important part when you trek to the higher altitude, so keep your body hydrated while trekking.

Badrinath Dham with Valley of flower and Hemkund Sahib Trek can be done with ease, though it has hard path in Valley of Flower but little techniques can make it easy for you to trek; the trek is favorable However, Pathways have steeps with boulders. But still can be done.

Is it suitable for children’s?

Is it a good option for the first time trekkers /or families?

This Himalayan trek is graded as easy to moderate so it can be chosen to take the family.

The best time to visit Badrinath Dham with Valley of flower and Hemkund Sahib Trek is June until the beginning of October the trek to this admirable destination can be planned between these months as the destination glows the most. The landscape is beyond imagination; the gigantic mountains wrapped with snow looks mesmerizing. Enriched by the glory of nature Trekking in Uttarakhand can be the best experience in all seasons..

Joshimath, a town in Chamoli District in the Indian state of Uttarakhand. Situated at a stature of 6150 Ft. it is an entryway to a few Himalayan hiking endeavors, trekking trails and explorer focuses like Badrinath, the hypnotizing sees. While coming to Joshimath, you will go by the Panchprayag or the five blessed junctures of Ganga- Devaprayag, Rudraprayag, Karnaprayag, Nandaprayag, and Vishnuprayag. Along these lines, keep your cameras to capture the beauty of mountains.

The famed town of Badrinath is among the four dominant Char Dham pilgrimage sites of India as well as the Chota Char Dham. This holy town is named after the Badrinath temple dedicated to the preserver, Lord Vishnu. Many Hindu devotees are smitten by the charm of this holy shrine as it showcases the traditional Garhwali wooden architecture.

On this day move to Govindghat from Badrinath first, and then to Ghangaria from Govindghat. As you arrive at Govindghat then your trek to Ghangaria starts. Explore the whole beauty; see the majestic Himalayas in front of you. There are a lot more surprises for you in coming days, but this is going to be the best ever trek for you.

On this day trek to Valley of flowers, this wonderful valley trek will make you feel the beauty so deep, as this flower trek will make your eyes so soothing. The voyage to the Valley of flower trek will be around 4 Km away, and the valley is 5- 8 Km long, actually the distance depends on the trekker totally, another essential thing is stamina that is necessary for the trip to Valley of flowers. When you start your day with Ghangaria after 30 min you will witness the forest check post, and later the waterfall name Laxman waterfall will be seen as the center of attraction, the thick layer of a white will seems like ice the crystal clear water will make your day. Few more time in the greenery later looking at the Pushpavati river flows below the ridges will be so captured, the trail will be steeply, and tone paved, and you will be able to see many bridges and the landslide areas. When you enter the valley you will be mesmerized by the beauty of it; you will go crazy by looking at the beauty that you have never seen before. The Valley of flower trek sets four moons in the Himalayan range the blue poppy, snake foil, white leaf hog foot, Himalayan Rose, meadow geranium, and other beautiful flowers the butterflies with of a variety of colors. The colorful blossoms end after 5 km and stretch till glacier, and you will also be able to see the Nilgiri Parvat, Bhyundar Khal, Rattaban, Gauri Parvat, etc. if the weather will stay clear.

On this day get ready early in the morning, and after breakfast, the trek will lead towards Hemkud Sahib that is around 6 Km. Hemkund Sahib is one of the most sacred shrines of Sikh, Hemkund Sahib is the highest Gurudwara in the world that is nestled at an altitude of 14,205 Ft. The trail on the 4th day will same as the previous trek such as stone paved ways and continue ascent will be there, on the way you will see many shops where you can have your snacks and can energize yourself. Beholding the beauty of rare flower Brahmakamal that will be seen beside the pathway the Hemkund Sahib is nestled beside the glacial lake Humankind, in the clear sky you will be able to witness the magnificent reflection of the Saptrishi peaks, the lake occur with the melting of Hathi Parvati and Saptrishi peak. The Laxman temple will be found near the lake, and the beauty of the valley of flowers will look so exotic, there is no doubt that trekking in the Himalayas is nothing more than a boon as India occupies the Himalayan range in abundance; therefore, trekking in India is another beauty. You will be able to observe a lot of rare thing in the valley of flower trek in Uttarakhand, and it is one of the well known when it’s about trekking in Uttarakhand encompasses by the Himalayas.

On this day return to Joshimath after breakfast in the morning, then you will descend to Joshimath, and you will keep the memories of this beautiful valley of flower trek with you, the blossoms will be in your heart for life, this wonderful trek in Uttarakhand is so attractive, as trekking in Uttarakhand is so beautiful in the lap of Himalayas. Valley of flower trekking will blow your mind and soul and will make it the most ultimate trek for you of all time the valley of flower cost nothing but physical fitness and this trip to the valley of the flower will create beauty in your mind for trekking in India.

On this day, the journey of the trek will be over by returning from Joshimath, and from there the drive will head towards Dehradun/Rishikesh/Haridwar. The ride from Joshimath will start early in the morning as it will take around 8 to 9 hrs to reach any of these three destinations.