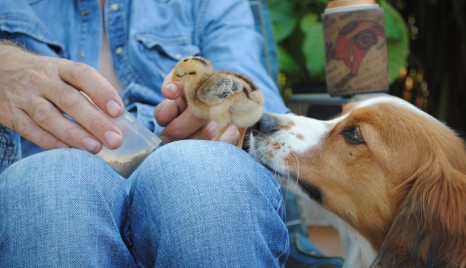 We have 12 chicks right now, the oldest 4 are about 6 weeks old and the others should have hatched in 1 nest, but a second mother joined sitting on the remaining eggs. We were wondering how they would mother the chicks. We forgot to mark the eggs when the first mother starting sitting on it and a few days later we counted more eggs, 9 in total. So it would be logical to think that the eggs would not all hatch on the same day, which could cause a problem. And it did... 4 of the eggs hatched on the same day and after 2 days she went off the nest, we believe this was the first mother. The remaining 5 eggs were left alone for a while but the second mother decided to sit on it. A few days later we heard again beeping sound under her. This time 3 of the 5 eggs hatched and the mother went out of the nest. One of the remaining eggs was about to hatch and the chick had already punched a small hole in the egg and started to peep. So we put the 2 remaining eggs near where the chicken was with her 3 chicks, hoping that she would sit on it a a little more. But she did not.
Sofar I - Mark - had nothing to do with everything as I heard everything from Ans. Last Monday I went to the chicken coop to check what was going on, as I was worried a bit about the 2 remaining eggs to hatch. I found the 2 eggs far apart from each other. One egg was broken and you could see that a new chick was in the making, but maybe 2 days from hatching; the egg was cold and I did not feel any movement or heartbeat in this egg. The other one was the one with the hole punched into the shell and still beeping. The chicken with the 3 chicks was not interested anymore, that's what I concluded. I took the beeping egg home decided to carefully peel off the shell (when the mother is not sitting on it anymore the egg shell hardens and it gets very difficult or impossible for the chick to break the shell). The chick saw me first and since this happened I am 'papa Mark'. We call her Doris (hoping it's not a rooster as it must be killed and it's not fun to kill your own kids).
I first put Doris in the incubator and turned the heating on, so it's a cozy 37.5 degrees in there. Chicks start eating and drinking the second day, so I did not have to care much for her. Doris is now 5 days old and eating, drinking, sleeping and shitting. We are taking Doris for a walk every day a few times. You must be really carefully not to step on her as she has the tendency to run right under your next step.
While writing this post Doris is in the 'bench' and beeping hard to call my attention. At night she is quiet, still sleeping in the incubator with a cloth over her to mimic laying under her mother. We tried to put her back to the mother with the 3 chicks, but she clearly did not want to accept her. We were even afraid she would pick it dead. When Doris is bigger we will have to try it again, but I guess there is a chance that she will always be seen as 'different'.
Borre is dealing extremely well with the situation, although we believe he is suppressing his instinct. And we talk a bit of the same to Doris as we are used to do to Borre. So many times Borre is responding, while we are talking to Doris. 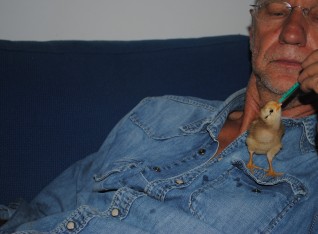 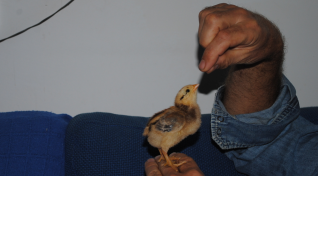 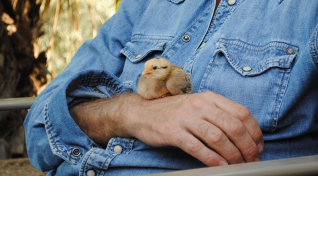 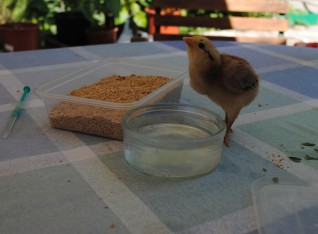