First of all: you all have received a 'test test test' message last week, which should never have been sent out. We were testing the text editor of the blog tool and although this post had the status 'offline' it was still sent out by error. Sorry for this...
Yesterday we were ready to pour the concrete for the first meter of the backside wall in the former coal storage building. We prepared everything well and had an extra pair of hands on the job as Mark has arrived here this week with his partner Kylee for a 2 month volunteering period. So we were with 4: Ans, Ondrej, Mark and myself.
All went very smooth till we were just about to think of the completion of the job. When I drove back with the loader after the concrete has been poured in the trough we made to fit on top of the steel forms, I noticed a bit of distance between the concrete base of the wall and the bottom of the steel forms. I knew that we need to tilt these forms a bit to the inside, but in my memory the distance was just a few millimeter, not over 1 cm. A minute later when I was cleaning the concrete mixer with water for the next load, Ondrej came to me and said: "I think we have a problem.". When he says this it's really a serious problem. I stopped my cleaning job and followed Ondrej to the wall in the making. On the left side lots of concrete was coming out from the bottom and the space between the base of the wall and steel forms was over 3 cm. In astonishment I looked at it. How could this happen? The forms of 3x1 meter weigh around 150 kg each and 4 of them are tightly connected over the whole length of the wall. It's obvious that I underestimated the force of the pressure again. Especially when you are compacting the concrete well using a fibration stick, the force at the bottom becomes very high.
What went wrong and how could we have prevented it ?
What went wrong is that there was just a tiny space of just 1 or 2 mm between the concrete base and forms and the concrete at the bottom had collected enough force over the total length of 13 meter to lift the whole form structure. In my wildest dreams I would not have thought this to be possible, especially because these concrete forms are very heavy. But it happened and what we should have done is first pour a small layer of just 5 cm, let it harden for 2 days and then start the real concrete pouring job. It will not happen again, that's what I can assure you.
Today we evaluated the situation. Was the partly filled first meter already hard enough to fill it up completely or should we wait. Normally you have to wait for at least 48 hours before you can add the next layer and these days it's very cold; the night temperature is around zero Celsius, so the concrete hardens very slowly. On the other hand we need just to add another 35 cm. I tested the concrete and I was although still soft of course I was not able to press a finger in it. So we decided to complete the first meter today.
Coming Monday we will place the forms for the second meter and fill it with concrete. A bit more challenging as it's getting higher. I have just discussed how to make sure the force of the concrete is not pushing the form out. The huge crane we have comes in very handy with this work. We could maybe get the first meter of forms in place with a loader or an excavator, but a using a crane makes sense. We use walkie-talkie communication between the operator and the person on the workfloor, that works pretty well.
As mentioned we have 2 volunteers arrive this week. They stay in the Doctor's house. There was a bit of a problem with the sewer system in the bathroom. We went in this with an inspection camera and saw a that the tube was almost completely clogged with ingrowing roots. My own mistake as when I made the bathroom I did not glue the PVC tubes together as it was poured in concrete completely. Big and stupid mistake, as wet concrete invites roots to get in there and it did and once in there they multiplied and expanded. The last photos show what we found when we drilled open the bathroom. It's fixed now (and glued together the PVC tubes) and today I have done the tiling; tomorrow the grouting.
We are very happy with Mark and Kylee already and they will be staying here for a few months. They have traveling for a number of years around the world. Take a look at their website TheseForeignRoads.com.
Next week we will continue to write about the progress of the wall. If everything goes without issues we should be able to get 3 meter high.
Have a great weekend ! 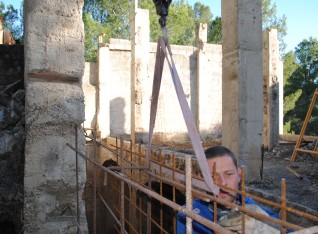 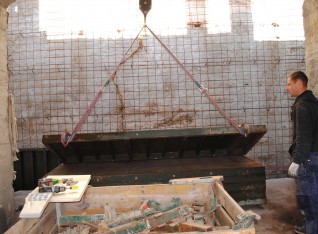 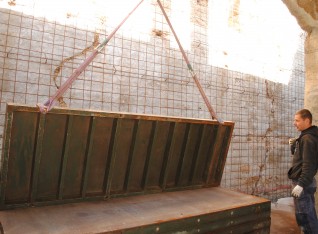 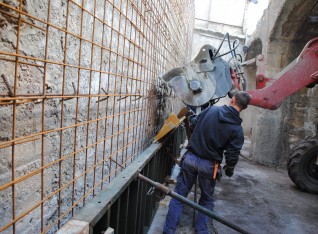 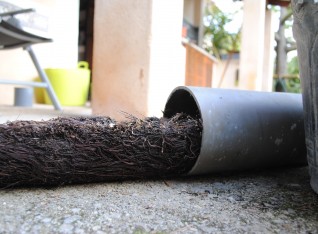 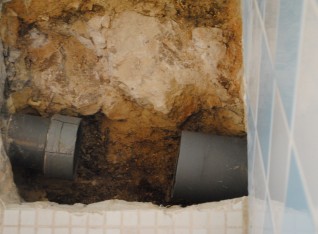 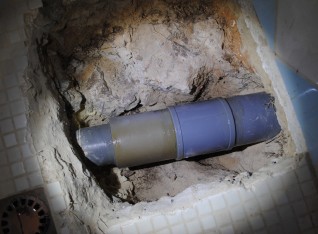 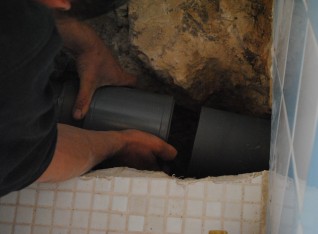