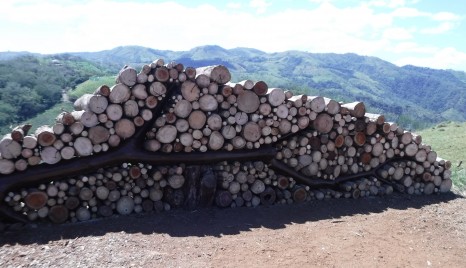 There is a lot of wood around a Teak plantation, as you might imagine, up on the hill, El Ranchero is totally made of wood, the casa is predominantly made of wood, even El Ranchito is made of wood (a tiny self-contained version of El Rancher, perfect for lovers of off grid living and bird watching). We have some wooden chairs, tables, planters and the odd garden step or two, so why not some art. After all we need somewhere to store our wood for fires and more importantly BBQs so why shouldn’t it look good at the same time.
When we arrived here back in August, there were many images of wooden structures, with carvings of ornamental owls and such like. These were thankfully for inspirational purposes only and we eventually settled upon a fallen tree with the cut wood and logs representing the leaves. The first volunteers helped to pick a fallen tree (Pierre, Reno, Santiago, Nick and Heimo), thankfully there was one out the back of Casa Principal, our house. The only issue was that we had to get this giant fallen tree to El Ranchero, which isn’t exactly far but it is up “Heimo Hill” so no mean feat.
It took our 5 guys over 2 hours just to get it out of the field and then another hour to get it up the hill, I think it may have fallen off the back of the trailer, but I can’t be sure :s. Anyway, it went up there and then it sat there for, well quite a while, until just last week actually. Until on a not so fine day a small hurricane came along the Caribbean coast and sent the tail end named Nate to the Pacific. Old storm Nate, managed to not only cut the power to the finca for 2 days but also blow down a tree that had stood for many a long year up at El Ranchero, so long in fact a very large lizard had been living in it. (I have to admit that this giant lizard is no longer quite so giant, but we will get to that).This tree had fallen precariously close to the outdoor kitchen that we had been building up at El Ranchero, so we went up with a chainsaw to cut it down. What a perfect opportunity this was to start work on the leaves for our fallen tree/wood storage shed, I hear you say. That’s what we thought too great minds.So we spent a day chopping down the tree and keeping any decent bits to one side to use for the wood store. All of a sudden there is a very girly shriek from both Nick and Patrick, our Swiss/Auzzy chef who were at this time taking their turn on the chainsaw. I wandered over to see what the commotion was about, there with the end of a lizards tail in his hand, is Patrick, and Nick was stood open mouthed, holding what was part of the tree with a huge hole in it. It turns out that as Patrick had cut through the tree he had also cut off the end of a lizards tail and when Nick had gone to pick up said log and put it on the pile, it had thrown itself out of there and ran off in to the distance to lick its wounds and re-grow its tail. - I learnt that this is actually something they can do; after we all stopped laughing and had googled it, they are very clever! . The next day we went and spent 5 hours cutting and carefully placing these log/leaves around the frame. It was starting to take shape; and then came a WhatsApp voice message stating that there wasn’t enough contrast between the tree and the “leaves” and that we should replace all the wood with lighter wood from a tree that we had just had cut for use in the outdoor kitchen. Big sighs all round, we are patient people, this is not a problem, we can keep the wood that we have already cut and reuse it as contrast in-between the lighter leaves, this will add some depth and make it even more arty (or we can just bring it all to our house and keep it in our not so arty wood storage). Just to be on the safe side though, we will also paint the tree a much darker shade of brown to ensure that no matter what wood we use, there will be ample “contrast”. Once more the tree lays dormant until we can find the time to cut up a different tree with a paler shade of bark.Till next time from the overzealous cutters of wood and lizard tails :s …Pura Vida
(no lizards were permanently harmed in the making of either our tree storage or this blog) 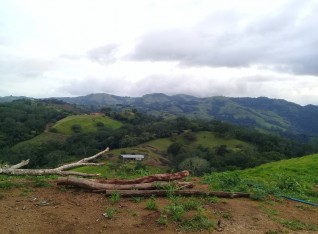 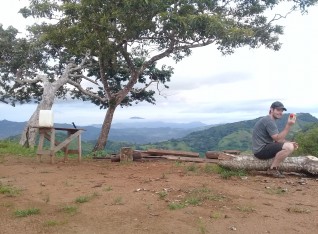 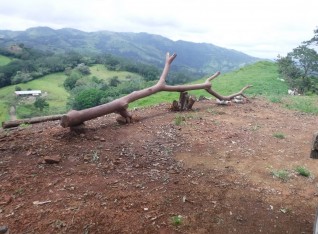 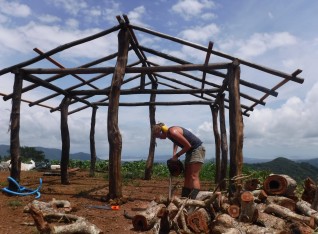 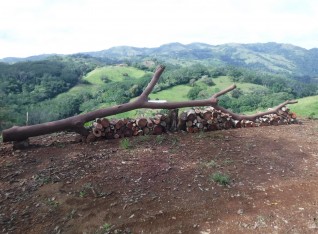 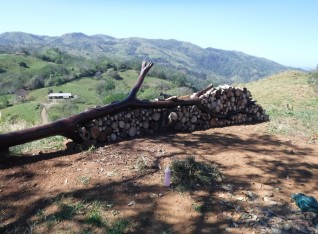